In the grim darkness of the far future there is only war.

Games Workshop publish a little Science Fiction game called Warhammer 40,000 which is colloquially known as Warhammer 40K or just 40K. Maybe The dear reader has heard of it. The son & heir and some of his friends certainly have. And ever since he has played 40k The son & heir has been knee deep in the masses that are the Imperial Guard*.

* Perhaps now renamed to Astra Militarum? It’s all a little confusing when one does not follow these things closely, one is not involved in the game and the new versions seem to continually change things.

At some stage The son & heir decided that the regular Imperial Guard forces sold by Games Workshop were not expensive enough and fell for the gas masked trench coat wearing Death Korps of Krieg regiments as sold by Forge World. And so some Death Korps figures were procured.

Above: the commander stalks out to the tree line to “observe”. Note the blast damage on the base.

Originally the plan was to paint them in a colour scheme reminiscent of French WWI troops but that changed somewhere along the line. With the passage of time the idea of the original paint scheme has been revived. While home for a break from the studies in Dunedin The son & heir dug out a command figure – and some of the paints of von Peter himself!! 😯 – and pigmented a command figure. Other figures were started but not completed so they don’t get to feature here. At least not yet.

Above: having “observed” the commander turns and stalks back into the tree line. More blast damage to the back of the base.

von Peter himself is of the belief that all of the Death Korps of Krieg models – even the horses – are presented with their gas masks firmly in the “on” position. One can never be too careful you know! von Peter himself must further assert that this thematic device often brings to mind “The Spy vs spy” cartoon he used to read as a younger man. Perhaps this is not quite the linkage that Games Workshop were looking for.  😃

Or are the gas masks simply hiding the snouts of rat men – the Skaven of Games Workshop’s fantasy game – in space?! Perhaps there is a dark storyline yet to be revealed. Perhaps not but maybe this provides a clue as to why the Death Korps of Krieg were so alluring to The son & heir. One of his Fantasy armies was none other than the dirty cheating cowardly low life snouted Skaven!!!

Above: A pack of rats from The son & heirs Skaven army. The photo dates from February 2011.

Back to proper historical figures next. At least that is the plan!  😃

It’s Easter 2018. Not only does that mean a couple of extra days off work but it also brings a new post. Hurrah!! Oh – Easter is also a significant event in the Christian calendar. 😇 Onwards …

The son & heir turns to the dark side

Konrad Curze is/was the primarch of the Night Lords Space Marine Legion. He plied his trade up to and including the Horus Heresy. So 30K not 40K in the ever expanding Games Workshop science fiction lexicon. And The son & heir has developed what must surely be an unhealthy interest in Konrad and his legion. Fortunately for The son & heir this disturbing fixation was not the well hidden secret it perhaps should have been and some of his friends banded together to procure the Forge World resin kit of Konrad Curze Primarch of the Night Lords as a birthday gift. I hope there were a quite a few friends as the model currently shows as available for £60!

The Christmas break saw some assembly and pigmentation to create the figure shown below. There are other “bits” that came with the kit. What will happen to those is unknown to your correspondent.

Konrad is shown below in a battle damaged science fiction building as built from a modular kit by The son & heir. The idea was to set a science fiction type scene / ambiance for you The dear reader. So please do not think too deeply about the incongruence of Mr Curze’s base and the building he is in!  😃

As usual around here the photography does not do the pigment application justice. Please click the images for a larger and clearer view. 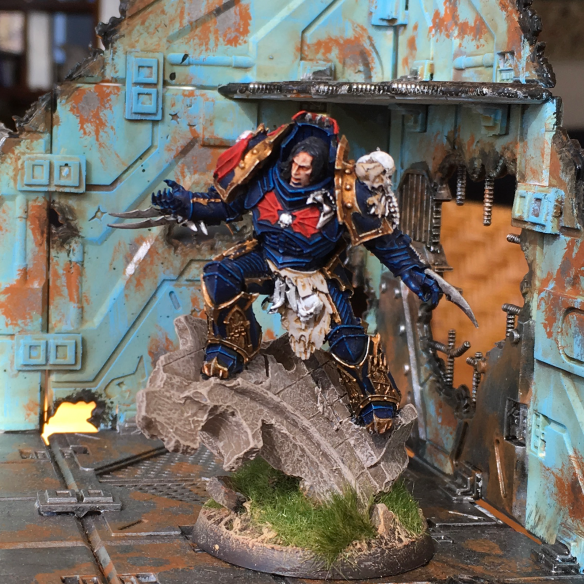 Dominic Lieven is the author of the book “Russian Against Napoleon” and if you haven’t read it you really should. It may very well make The dear reader reconsider some of the stereotypes that we all grew up with.

Distinguished Russian historian Dr Dominic Lieven of Cambridge University addressed Military History Night on the less-explored aspects of Russia’s response to Napoleon’s invasion in 1812, and the victories in Europe of the following years.

PS. the preliminary burble concludes and the real show starts after about 30 seconds.

von Peter himself likes to think that once based his figures will stay based.* Time will tell whether this will remain a truth or whether a series of rebasing exercises await in the future. The current mantra is that if the rules require rebasing then good bye rules. But such a parting of the ways has not yet come to pass as reasonable gamers can normally sort any issues out.

* there is a currently dormant project to rebase a purchased English Civil War Covenanter army but that doesn’t count!! The rebasing is to move the army from old style WRG basing to element basing.  😇

Anyways because the figures are theoretically based for life von Peter himself likes to use plywood bases from Litko. Not the cheapest option but worth the peace of mind for this author. Of course Litko manufacture a lot more then just plywood bases now.

And why bring this up? Because Litko have a new redesigned website located at their old address https://litko.net. What’s more they have a 10% off an order deal going …

Use the discount code WELCOME at checkout for 10% off your order. Use it as many times as you like before April 30th, 2018. After April 30th you’ll get another treat in your inbox… another discount code to use on a future order! 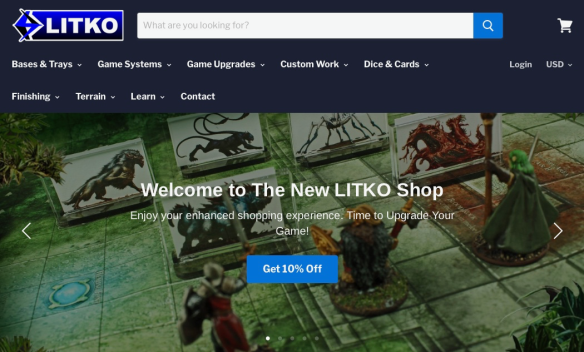 The gentlemen over at TooFatLardies are scheduled to release their latest ruleset “What a Tanker!” on the 9th April 2018. These are rules for WWII tank vs. tank combat … no artillery, infantry or aircraft to mess things up! Apparently they provide for a fairly quick fire game. Each participant controls one to perhaps three tanks with the rules tending to the beer and pretzels end of the scale. Besides one off games there is a quasi campaign system with surviving crews gaining benefits / skills. Preorders can garner savings so if The dear reader is interested get in quick to save some of your hard earned cash!  💰

That’s all for the moment. If all goes according to plan the next post will flaunt some images featuring cornflower / medium blue.

Most pictures and all posts copyright © Peter Haldezos 2012-2020