It’s nearly that Christmas Day time of the year. And here is von Peter himself is slaving away on this the first day of his Christmas & New Years holiday leave to bring you this update. I trust that you’re all excessively grateful!

The son & heir persists with his wretched rabbly rebels

Despite being trapped in ongoing intensive holidays and suffering from long sleep ins and other trials and tribulations of the idle The son & heir has spawned another unit of dirty reb’s. This time it’s the 53rd Virginia that have answered the call to the front … or more correctly this front as they look like they’ve been in the field for a while already. Points of interest include the officer who grips his rifle – by repute he’s quite the shot – and his slave who acts as the regiment’s drummer.

The son & heir’s southern horde now consists of 4 regiments, a battery and a couple of command stands. A fifth regiment is well on the way. Mr Lincoln is not amused!

Figures from the Perry’s ACW 80 American Civil War Confederate Infantry 1861-65 and the flag is from GMB Designs.

The son & heir also shows favour to his Medievals 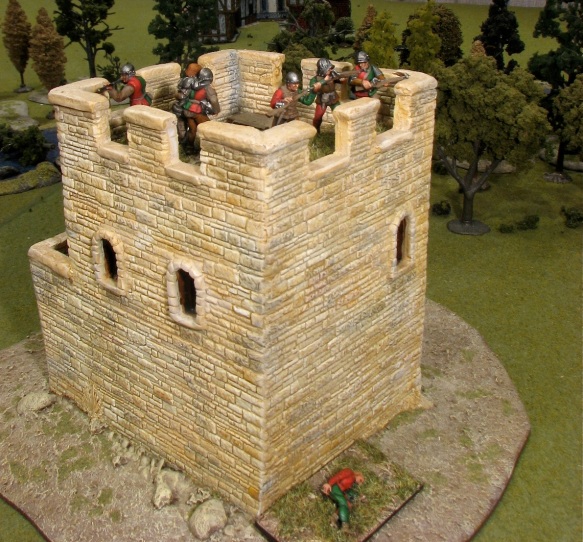 As per their chronological order in history these skirmishing Medieval handgunners preceded the American Civil War regiment above off The son & heir’s painting desk. (Actually it’s the painting desk of von Peter himself that the Son and heir has appropriated but that’s another story.) This is just another example of how seriously the historical side of the hobby is taken at Schloss von Peter.

The son & heir was keen to paint these in a red and green livery and then repeatedly referred to them as Santa’s little helpers due to that colouration. So much for taking history seriously at Schloss von Peter then. That didn’t last long! <Sigh>

The handgunners are shown during their ill fated defence of a watch tower. Their brave red headed leader Sir Simon is being helped away having just sprained his ankle after slipping on some bird droppings. Poor Toby lies at the bottom of the tower having reached too far over the edge to shoo away a raven at the instruction of Sir Simon … that then circled the tower dropping it’s load which was to prove the downfall of the bird hating Sir Simon. Karma moved fast during the later Middle Ages.

Handgunners from the Perry’s WR20 Plastic ‘Mercenaries’, European Infantry 1450-1500 box. The casualty figures are also care of the Perry’s but are metal and are from their War of the Roses range – WR32 Dead and wounded.

A while back Calpe Miniatures released their Saxon artillery guns – a range of five pieces. As a Christmas taster von Peter himself has now accepted into stock the guns for two foot artillery batteries – one 6 pounder and one 12 pounder – at the scale of 1 model per 2 actual guns. Not only does this satiate von Peter’s need to acquire gaming paraphernalia but it also spreads the cost of purchasing the batteries. What a bargain!!

von Peter himself may yet pour the contents of some of the packs out of their zip-lock bags, give them a little inking and then post some pictures of them here in the future.

The Saxon 6 pounder as “borrowed” from the Calpe website. von Peter himself can but hope that his will look so fine

Some of these will undoubtedly be recruited by von Peter himself and will eventually be flaunted here.

Oh yes, and others are on their way. Hurrah!

Just to update the story of the 1st Corps Eastern European Church, aka the Russian Church.

Now all one has to do is to squint a little and pretend that the WWII Russian infantryman in the picture is really a Napoleonic Russian jager.

A Merry Christmas and a Happy New Year to all. von Peter himself fully expects to see everyone safe and sound post the celebrities. Take care of yourselves and your fellow comrades in ams.

As usual <click> on the images for a larger and clearer image.

Most pictures and all posts copyright © Peter Haldezos 2012-2022